The third main talk that was given at the 2012 Eastern Catholic Encounter West Coast was by Father Deacon Sabatino Carnazzo.

Father Sabatino is quite a dedicated and dynamic speaker, as evidenced by his additional ministry through the Institute of Catholic Culture, which he founded to help support lay catechesis and spiritual education.

His talk at the Eastern Catholic Encounter wove similar threads on the role and vision for lay leadership in our Eastern Catholic Churches as the previous speakers whose talks have been posts on this site. Like those other speakers I would like to highlight three key messages that spoke to me most from that weekend.

The first key point by Deacon Sabatino is that it is important for us as lay people (or clergy) to always define our vocation as something that is positive, not negative. We are ideally defined not by what they can’t do, but what they can do. To explain that our Tradition does not take lay people and relegate them to some fundamentally different Christian existence from the clergy, he called us to consider the liturgical practices of our Churches. At his ordination, a man being ordained to the diaconate is clothed with deacon’s vestment. To do this, he does not strip away his baptismal garments.

Think of the imagery here! The ordained is at his core a baptized Christian. To wear diaconal, presbyteral, episcopal, or even papal vestments in the absence of one’s baptism is nonsensical. As such, we are all most fundamentally Christians who are baptized into Christ. This leads me to my second point of reflection in Father Sabatino’s talk…

In describing salvation history, Father Sabatino turned our attention to the Holy Gospel of the Evangelist John the Theologian.
In John 1:14, we read that Christ the Logos came into the world, but his own people did not receive Him. To those who did receive Him, however, He gave them the power to be His sons. Father Sabatino emphasized that we cannot understand this gift of being sons and daughters of God until we see it through the prism of our baptism into Christ. To do this, we need to consider a key passage on baptism. In Romans 5 we read that we were baptized into Christ-yes, even into His Death. This means that our Baptism is not meant to merely be a model of the Theophany, where the glory of the Baptism and the peace of the Baptizer beholding the scene prevailed. Instead, we must see our union with Christ to be a model of all of His life and yes, His death.

That we all have our own union with Christ’s life, death, and resurrection may make more sense of our own travails on this earth, if we have the eyes of faith to unite ourselves with this vision. 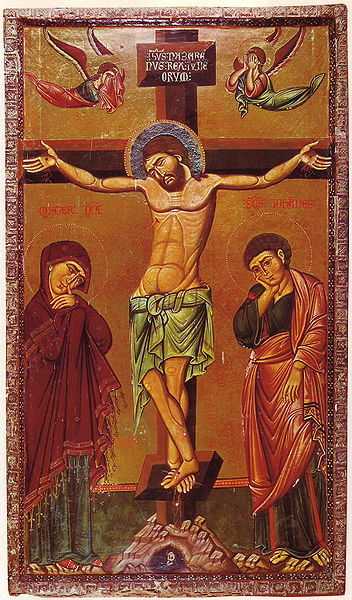 The third point from Deacon Sabatino’s talk that I’d like to reflect upon is his exhortations to the laity. He pointed out that many lay people suffer from what he called the “my real estate” syndrome. Many times we feel that something is “my job”. We want to say to a new or zealous soul, “You can’t do it that way.”

In contrast, from his Pastoral Epistles, we can see that Paul rejoiced in Timothy growing up in the faith. Timothy took on his own vocation and there was no appeal to how Paul did things. Timothy would eventually grow up and be in charge based on his own unique vocation, and this is something we must see in our own vocations. What can stop us from doing so?

Father Sabatino pointed to our quintessentially American flaw of what he called the “Me first!” syndrome-we must take leadership in the parish but not be imposing upon the unique gifts of others. So often this (and other factors) lead people to leave our parishes.

If someone were to leave our parish, we must also ask ourselves: what do we do about this, if anything?
As His hands and feet in the one body, we must live in prayer and love one another, seeking reunion and reconciliation. After all, best friends spend time together, and when we do not mirror that in our mystical reality as the Body of Christ, we can only suffer as a result.

In closing my one point where I would like to call for correction/emendation in Father Deacon Sabatino’s talk was towards the beginning. In discussing the centrality of the Holy Scriptures, Father Sabatino asked how many participants in the Encounter had brought their own Bibles. Few people (if any) raised their hands at this point.

He used this to point out that in our American society, so many Evangelical Protestants carry their Bibles wherever they go. He warned them of the reality that many Eastern Catholics have left our Apostolic Churches for these ecclesial communities because so many Protestants read their Bibles and have the habit of carrying their Bibles wherever they go. They bring with themselves arguments meant to deride Tradition and promote their own viewpoints, which have led some of our Faithful to depart from our Churches. Father Sabatino suggested that if we do not carry our Bibles with us, we are asking for further defeat against these Evangelicals.

As a former Evangelical, I would counter that this point needs some further refinement before it is accepted carte blanch. If we would only carry the truth of our faith and understand our liturgical traditions with their deep Scriptural treasures, we would not need to carry a physical Bible with us. Instead, our hearts would overflow with the truths of those Scriptures that we know and love, as we seek to see God in our spiritual hymns and liturgical services.

Nevertheless, I echo his sentiments that the Scriptures should be closer to us. I just think that we can feel their truth even more closely than having a physical Bible with us, if our Church prayers are deeply incorporated into our hearts, minds and souls.

Come O Jesus, Our Savior, Redeem and Save Us!