Family feuds can be the worst of feuds-perhaps that explains the rancor which surrounds so much of Catholic/Orthodox dialogue. If we weren’t so close, our actual differences would seem so far away. They’d be mere annoyances from some strange person. But as ecumenical dialogues have reiterated so many times, the Catholic view of Herself and the Orthodox Church is that they are two Sister Churches, which may explain the bitterness surrounding their interactions.

Does this notion of Sister Churches deny the primacy of Rome or imply that the Orthodox are clearly some sort of step-daughter? This is where we can see that many have allowed the cart to overtake the horse, especially in online dialogue.

For a concrete example of this, take a recent interview with famed liturgical scholar, Fr. Robert Taft. As a Greek Catholic priest, Fr. Robert goes at length to explain why it is that he or any Catholic should be invited by Orthodox scholars to describe the Orthodox tradition to the Orthodox.

The simplest way of putting it was when Fr. Robert pointed out that the two liturgy professors at St. Vladimir’s Seminary (an Orthodox Seminary) did their doctoral studies with him! They were each his protege!

But on a more foundational level (and with broader implications), Fr. Robert speaks to the problem of ecumenism as it relates to a lack of genuine desire to give in these discussions, where the notion of Sister Churches is not normally granted in ecumenical discussion. He says,

As such, when Fr. Robert Taft was interviewed even more recently, his comments on the notion of Sister Churches have ruffled the feathers of some with a simpler ecclesiology.

When asked about what Catholic/Orthodox reunion would look like, Fr. Robert wrote:

“What it would look like is not a ‘reunion’ with them ‘returning to Rome,’ to which they never belonged anyway; nor us being incorporated by them, since we are all ancient apostolic ‘Sister Churches’ with a valid episcopate and priesthood and the full panoply of sacraments needed to minister salvation to our respective faithful, as is proclaimed in the renewed Catholic ecclesiology since Vatican II and enshrined in numerous papal documents from Paul VI on, as well as in the wonderful Catechism of the Catholic Church. So we just need to restore our broken communion and the rest of the problems you mention can be addressed one by one and resolved by common accord.”

Where Fr. Robert Taft’s interview becomes most interesting in terms of ecclesiology and Sister Churches comes just a bit later in the interview. There he states:

“The new Catholic ‘Sister Churches’ ecclesiology describes not only how the Catholic Church views the Orthodox Churches. It also represents a startling revolution in how the Catholic Church views itself: we are no longer the only kid on the block, the whole Church of Christ, but one Sister Church among others. Previously, the Catholic Church saw itself as the original one and only true Church of Christ from which all other Christians had separated for one reason or another in the course of history, and Catholics held, simplistically, that the solution to divided Christendom consisted in all other Christians returning to Rome’s maternal bosom.

Vatican II, with an assist from those Council Fathers with a less naïve Disney-World view of their own Church’s past, managed to put aside this historically ludicrous, self-centered, self-congratulatory perception of reality. In doing so they had a strong assist from the Council Fathers of the Melkite Greek Catholic Church whose concrete experience of the realities of the Christian East made them spokesmen and defenders of that reality.”

Here he is quite explicit that if the terminology of Sister Churches is genuine, as it is quoted repeatedly in Vatican II, that spiritual kinship is such that one can hardly argue that two sisters have an ultimately different parentage. Thus, one can consider the concept of Sister Churches and see that there is a common foundation between Sister Churches, even though these Churches are not normally in communion with each other (at this point in history, at least).

Fr. Robert’s thoughts would be in line with the Joint International Theological Commission for Orthodox Catholic Dialogue, which has released such documents as the Balamand Declaration. In it, one can see that proselytizing of Catholics by Orthodox (and vice versa) is condemned, because of our common heritage as Sister Churches.

But has Balamand gone too far? Is the whole idea that we are Sisters in a squabble not authoritatively Catholic, subject to theological opinion which are not in contrast with Tradition? Does a lack of proselytizing imply relativism between the actual issues which do divide Catholics and Orthodox? Ultimately, Balamand is part of the Joint International Commission, which is engaged in an ongoing dialogue that is not dogmatic in nature. Its statements are, as such, not as authoritative as actual councils. Put simply, Balamand is not infallible.

To answer this critique of Balamand, I will not enter into philosophizing or anything of the sort. Instead, I will quote a document from Vatican II, which should be authoritative for Catholics (at least). In Unitatis Redintegratio paragraph 15 we read:

“Everyone also knows with what great love the Christians of the East celebrate the sacred liturgy, especially the eucharistic celebration, source of the Church’s life and pledge of future glory, in which the faithful, united with their bishop, have access to God the Father through the Son, the Word made flesh, Who suffered and has been glorified, and so, in the outpouring of the Holy Spirit, they enter into communion with the most holy Trinity, being made ‘sharers of the divine nature’.(35) Hence, through the celebration of the Holy Eucharist in each of these churches, the Church of God is built up and grows in stature(36) and through concelebration, their communion with one another is made manifest.”

Here we see that to Catholics who accept Vatican II, Orthodox Churches are able to build up the Church of God, which raises the obvious question: if Apostolic Christians (like the Orthodox) outside of “the Church” are able to build up “the Church”, how can this possibly be? Instead of pointing to Balamand and newer writings, we can go back to Vatican II and acknowledge that Orthodox Christians who are not in communion with Rome are in some sort of relationship with the Catholic Church whereby they can build up “the Church” in its totality.

Therefore, unless we deny the truth of Vatican II, we are confronted with the first image that began this post. Catholics and Orthodox are Sister Churches who share the same holy mysteries. As the Catechism of the Catholic Church states in point 1399:

“The Eastern churches that are not in full communion with the Catholic Church celebrate the Eucharist with great love. ‘These Churches, although separated from us, yet possess true sacraments, above all – by apostolic succession – the priesthood and the Eucharist, whereby they are still joined to us in closest intimacy.’ A certain communion in sacris, and so in the Eucharist, ‘given suitable circumstances and the approval of Church authority, is not merely possible but is encouraged.'”

Here I should note that the Catechism is again quoting Unitatis Redintigratio, and it is making the point that even now in our era of Bishops who are not in communion with one another, intercommunion is to be encouraged if the Bishops approve.

In closing, the image of Sister Churches as it relates to Catholics and Orthodox only makes sense if they are one family. Defects in communion and the primacy of Rome notwithstanding, it is far too simplistic to speak of Apostolic Christians who are not Catholic as merely “outside” of the Church.

May God enkindle a greater sense of Love among His Sister Churches, that the feuds which divide us may enter into oblivion. 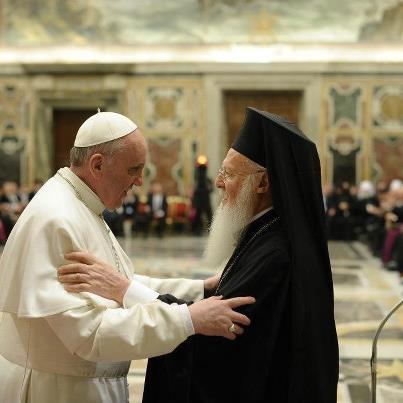