Memes can be powerful tools to convey messages. Their succinct nature combined with striking images can have a profound impact. However, with all brief communications they can also be misunderstood. To that end, I wanted to clarify on some of my own paltry contributions to the internet meme world. 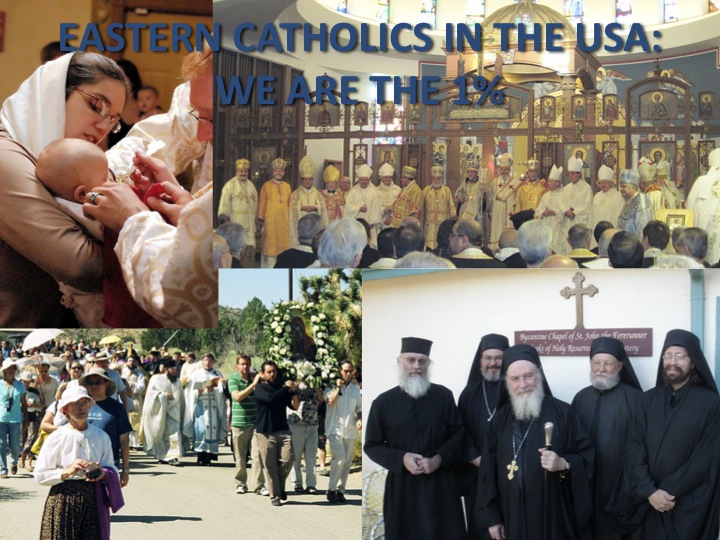 This picture was put together back when there were protests against the richest 1%. Using the verbal meme of the 99% vs. the 1%, there is a basic sociological fact that the richest 1% continue to get richer while the rest of us are either getting poorer/less wealthy. But I feel that there is something about this meme that could be missing if we focus too much on numbers as numbers, versus numbers as memes.

When I wanted to compare Eastern Catholics to this meme of the 1%, the goal was in some senses to encourage the smallness of our numbers so that we might one day become the 2%, etc. It may have been perceived as a “we’re small but this is where we are”. But really my deepest intent would be to ask us to realize our own wealth as Apostolic Christians, as opposed to a meditation on our numerical smallness.

His Grace, Bishop John of the Byzantine Catholic Eparchy of Parma was interviewed last year (along with many other great servants of the Church) on our Churches and vocations, and I find his comments here to convey this message in a deeper manner than any meme could. Please watch his comments, in addition to the priests who also answered this question on the hopes for Byzantine Catholics (and all Eastern Catholics/Christians, by extension):

So going back to the meme of Eastern Catholics as the 1%, the deep questions I would like to ask are:

1) Where do we see our deepest spiritual wealth?

3) Are we sharing our spiritual blessings, or holding them in?

4) What more can we do to share this treasure?

I think that as long as we are asking these questions versus raising our hands in despair or blame, we are on the right path.

Most Holy Theotokos, Save Us!