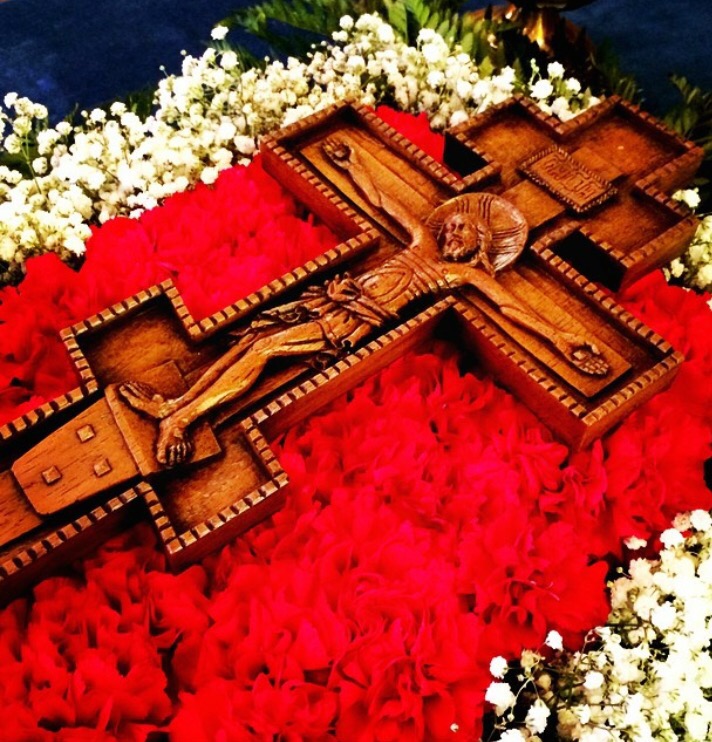 A lot of us love epic war stories. Classic movies like Spartacus or more recent movies like braveheart stir our hearts. Even more recent comic book battles that have been put to the screen can capture our imagination. Some of these are true stories, and one of those battles is directly linked to our feast today.

Over 1700 years ago, there were two armies lined up for battle along a river to the north of the ancient city of Rome. It was a battle that would decide the fate of a kingdom. While at war with a general in a struggle to rule the Roman Empire, another general saw a sign. He had a vision. Inspired by this sign, which happened to be a Christian cross, he eventually vowed that if he would be victorious, he would dedicate himself and his nation to the religion which had followed that same sign. Keep in mind-Christianity was a religion which, up to that time, was not legal. And yet this general felt that he was being called by this sign to follow it, and indeed he was triumphant in battle against his enemies. Eventually he became the emperor of the entire empire, he then legalized the faith just one year later and converted to that faith along with his mother. Today we venerate this man and his mother as saints. You probably know this man and you probably know his story. He is St. Constantine, who we remember with his mother Saint Helen on today’s feast of the Holy, life-giving, and precious cross. While today’s feast is about the cross, the story of today’s feast is not focused on this dramatic imagery of a cross in the sky and winning a battle across a river. That was the just the start of something even more profound and more beautiful than a military victory. It comes through the ages to us from the readings that we have just heard.

Our Gospel passage today is stark. In it we hear the story of the crucifixion taken from the 19th chapter of the Gospel of the Holy Apostle and Evangelist John the Theologian. But the verses that were chosen were like a masterful weaving. We didn’t hear the parts in the chapter that talk about the surrounding characters-the soldiers, the chief priests, and other pieces of the Gospel that were on the outside of the heart of the story. Those verses were selectively taken out to focus on the Cross. By doing this, the Church in her wisdom is lowering the noise around the scene from the “supporting cast” to place our hearts and our eyes on the bloody reality, the tragic reality, of Our Lord’s death on the cross. It ends with our Lord who gave up His spirit. The soldiers pierce his side as blood and water come forth, and the last word from John is that what he described was true. The passage does not continue to take us to the triumph of the resurrection. We don’t hear how it all ends. No, our eyes and hearts are fixed on that violent moment, that reality of total self-offering that our Lord, God and Savior Jesus Christ made. Does this death sound like victory? Not at all. Not, at least, if we stick to the surface of the story.

But we can see more deeply, beyond the surface, especially when we hear the apostolic reading from the 1st letter of St. Paul the Apostle to the Corinthians. We heard in this letter that “the cross is foolishness and a stumbling stone”. The cross sounds like defeat and suffering. It does not seem like the victory of some great military endeavor that turned the tides of history. But it is something that is a far greater victory than any dramatic story that may make its way to a movie screen, as was done with St. Constantine’s battle. It is called the wisdom and the power of God. The cross brings us life precisely through the death and suffering-this sounds like foolishness until we realize that Christ gives us his life when we are united to God. It is why we sing “Save your people O Lord and bless your inheritance, grant victory to your church over evil and protect your people by your cross.” We preach Christ and Christ crucified, St. Paul says, because of the fact that the Cross is a life giving moment in salvation history that meets us in our own suffering and confusion and unites it to Christ and his victory on the Cross. It did not seem like a victory in any way when one looks at it with human eyes. But again, there was so much more when one looks at it with spiritual eyes. This is precisely what happened at the event that gives us the feast of the Exaltation of the Cross.

So what then is the real story of the Exaltation of the Cross? It doesn’t start with a battle near Rome. It starts in a city that was defeated, not in a city of victory. It starts in the humility of the dust of the earth, not the lofty heavens. In Jerusalem, St. Helen led a search to find the same cross from our readings today. The actual cross that was covered in blood. It was covered in sweat and tears. According to Tradition, it was covered underground beneath a pagan temple to Venus which was part of the pagan Roman overthrow of Jerusalem. Maybe the pagan temple was built to erase the memory of Christ? Perhaps, but if so there was a hunger to find it once again. The faithful had heard that there was a temple to Venus and that this was where the crucifixion happened. They began to dig at the site, and in fact they did find multiple crosses. Together with the Patriarch of Jerusalem and others living there, St. Helen sought to determine which cross was the true cross. And that is when they had a brilliant idea. The crosses were placed to touch the body of someone who had died, and upon touching the true cross, he was brought back to life. Later, as the cross was elevated on high and the faithful cried out singing “Lord have mercy”, a dying woman was healed by coming under the shadow of the cross. Even some of those who doubted but witnessed the event came to faith, and the city of Jerusalem rejoiced one September 14th. Together with them, we are rejoicing with them, but let’s learn more about what we celebrate.

We can even learn about this same feast mystically in the Old Testament Scriptures. Two of the three passages from last night’s vespers service can show us this. First, in Exodus chapter 15 we hear the story of the people of Israel coming upon the bitter waters known as Marah. They were journeying, they were tired and thirsty but the water was not drinkable. What did Moses do to cure this bitterness? In Exodus we hear that Moses threw a tree into the water, and the bitterness was changed to sweetness. Now, is there any obvious way that this process of throwing a tree into water would make that bitter water sweet? No. It is a foreshadowing of the fact that the cross can rid us of our own bitterness and lack of ability to bear fruit. The second Vespers reading I would like to share with you is from Proverbs chapter 3 vs. 11-18 and there is a beautiful reflection there. After speaking to us as children and telling us that when we are reproved (that is, when we are disciplined) it’s not because we are neglected or hated. NO, it is because our father loves us, we are told to seek wisdom. In that passage we hear that wisdom is a tree of life to bring life to those who seek her. It might not seem clear why a tree was mentioned if we just picked up the book of Proverbs. But… when we hear that wisdom is a tree of life at this time of the year, that we are loved even when we suffer, we realize the same message. It’s the message that Christ through the cross brings us the tree of life. And where else do we hear this idea of a tree of life? In Genesis and revelation. Eden and heaven bring us a tree that gives life, and our Tradition teaches us that this is the holy cross.

The cross brings us life even though from one angle it only seemed to bring death. So we have the scriptures, our Church calendar, and our liturgical tradition. That may be all on the outside. What about me? What about you? What about this whole world? In many ways we often can only see brokenness and sorrow. We know that things aren’t the way that they should be. Turning to the cross we lift it on high just as they did back in Jerusalem, because we find that our death can turn to life when it is united to Christ. Our bitterness can become sweet. The holy wisdom of Christ becomes a tree of life that we embrace in love. Foolishness becomes our power. If you’re suffering today, ask how you may come to the shadow of the Cross to receive healing. It may seem foolish to admit that your suffering won’t simply disappear when you’re united to the Cross. But there is a wisdom that surpasses our understanding. There is life. There is exaltation.

St. Constantine may have won a battle through a cross in the sky, which allowed him to have one kind victory over enemies. But when St. Constantine and St. Helen went to Jerusalem to find and venerate the true cross at this feast, something even more special happened. The exaltation of the Holy cross celebrates a different kind of victory— and this victory comes about through that suffering from Christ and is linked to our own suffering, and it can bring healing to those who call upon Christ. The one led to a king becoming an emperor, but the other brings life through death. Let us go forth without fear when we see our own crosses by loving the Lord who willingly ascended the cross for us. Let us search out where the Cross can save us in our lives, and lift up the Cross on high as they did in Jerusalem when that cross was found. In doing so, we will be full of the life that comes through death. Glory to Jesus Christ!